Just as cloud communications evolve over time, so does a great television show. And just like your trusty legacy technology, even your favorite show might let you down in the end. Plenty of popular shows that started with a bang have gone out in a fizzle, inspiring a firestorm of audience complaints and hilarious memes. With a little stretch of the imagination, however, you could argue that unified communications solutions might have improved some plots.

Here's how UC solutions might have changed the outcome for three TV shows with notoriously bad finales.

"Dexter" did what no television show has ever done: made fans root for a serial killer. Dexter only killed other serial killers (for the most part), but it was always hard to imagine him getting away with it. Yet, he did in the end — and got his sister, Deb, killed in the process, an ending that made many fans furious.

Poor Deb killed her mentor, Captain LaGuerta, to protect her brother. Then she got shot by one of Dexter's targets. Instead of fleeing the country, Dexter loaded his sister's body into his boat and sailed off into a hurricane, presumably ending it all. Much to viewers' annoyance, however, the final scene reveals that Dex survived and has a new life as a loner lumberjack. Huh?

Dexter was never going to get a happy ending, but this finale left fans of Deb and LaGuerta enraged. The finale was made possible by Dexter destroying the only evidence the cops had against him, thereby thwarting his capture. That wouldn't have been so easy if the police force had unified communications solutions. The detectives could have immediately uploaded their evidence into the cloud for preservation and to share with others via a connected UCaaS hub. And with geolocation integration and automated alerts, their colleagues might have found the evidence documents before Dexter took them out. The lack of centralized, cloud-based communications led to the untimely death of a favorite character — and to one of the worst finales in TV history.

With mobile capabilities, employees — or friends — can connect at any time in any place using the channels they prefer, including voice, video, or chat.

The show about nothing meant something to a lot of people. With 76.3 million viewers tuning in for the live broadcast, according to Business Insider, the "Seinfeld" finale is the third most-watched finale of all time — and the source of endless whining about how it all ended for America's favorite misanthropes.

The two-part episode starts off well for the characters. Jerry and George sell a television show and invite their two best buds along for the trip to LA, but things go awry when the plane has to stop in Massachusetts for repairs. There, the foursome witness and video record a carjacking and are promptly arrested under the new "Good Samaritan Law," which states that people must try to help others in danger. They each get a year of hard time.

For fans who didn't think the characters got exactly what they deserved, there is one way cloud communications could have saved them (you know, if it had existed in the '90s). Soon after their arrest, they lament the fact that they chose watching the carjacking over interfering in it. Kramer remarks, "I still had it on video. We could have watched it later." If Kramer had UC with a video API, he could have captured the video, stored it on a secure server, and shared it with his friends later. What's more, the friends could have reviewed the video while video conferencing on a customizable API, allowing them to store and share the footage in one-to-one, multi-party, or large-group parties. Cloud-based video capabilities would have saved the day — and the show.

Perhaps having learned a lesson from "Seinfeld" about the wrath of unfulfilled fans, "Friends" tied everything up in a bittersweet bow. New parents Monica and Chandler Bing move off to the suburbs to raise their adopted twin babies, leaving behind their friends and their favorite coffee shop. Phoebe makes plans with her new hubby, Mike (pre-"Ant-Man" Paul Rudd). Joey's acting career is going strong. And of course, Ross and Rachel finally get back together, just as Rachel is about to fly to Paris for a new job.

While the finale didn't anger fans like the other series wraps on this list, it did leave a couple things to be desired, both of which cloud communications could have solved. First, the idea of everyone's favorite friends moving out and moving on was just too sad. If the Bings needed to move to the suburbs to raise a family, everyone else could have done the same — if their employers provided UC solutions that let them work from anywhere. With mobile capabilities, employees — or friends — can connect at any time in any place using the channels they prefer, including voice, video, or chat. Whether they're working in Paris, raising kids in the suburbs, or navigating the big city, these friends could share a cup of coffee via their unified communications platform and seamlessly collaborate on Phoebe's next big musical hit or plan the twins' first birthday party.

No, the "Friends" finale was not the most disappointing series finale. That honor might now be reserved for "Game of Thrones." But unified communications solutions might have made this finale feel a bit less final.

If these shows have taught us anything, it's that audiences expect a great experience from beginning to end. For businesses to deliver what these stories didn't, it's time to move communications to the cloud. 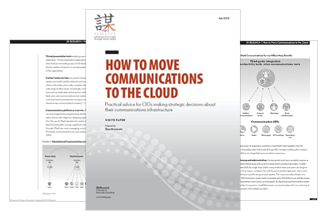