Communication Best Practices in the Workplace: Lessons From Pop Culture

You don't have to make the same mistakes as these characters. Use communication best practices in the workplace instead.

Today, communication best practices in the workplace involve cloud communication tools that enable teams to collaborate from anywhere in real-time and help you improve client communication practices. Thanks to communications APIs, you can even automate notifications to ensure that everyone is on the same, up-to-date page.

Without clear, reliable, cohesive communications, both your employee and your customer experience can suffer. Then again, suffering makes for great storytelling. From Greek comedies and Shakespearean tragedies, to modern-day sitcoms and practically every romantic comedy, miscommunications have entertained audiences for centuries.

Of course, you don't have to look back far to find good examples. Pop culture is full of them. Here are some lessons we can learn from movies and TV shows about what can happen when communications break down.

HBO's hit show captured hearts and minds for nearly a decade and then wrapped up its final season at a rapid-fire pace that frustrated and infuriated more than a few fans. But just imagine how fast the story might have ended if Robert Baratheon had put Ned Stark in charge, as he intended to do in season one (or book one, if you're a purist).

On his deathbed, King Robert named his loyal, level-headed friend Ned Stark as Lord Regent and Protector of the Realm. As soon as Robert died, Queen Cersei destroyed the will, the two witnesses failed to back up Ned's claim, Ned lost his head, and the "War of the Five Kings" was off to a start. That's the problem with paper. If Robert had cloud communications with secure access and disaster recovery, his message would have gotten through to the right people at the right time.

Of course, even if level-headed Stark hadn't had his head leveled, winter was still coming to Westeros, and along with it, a horde of the undead. Therein lies another opportunity for communication best practices in the workplace. If the Night's Watch had mobile devices, they could have captured video proof, uploaded the footage to a unified communications platform, and shared it with leaders across the Seven Kingdoms. Then, instead of fighting amongst each other, the human armies would have headed north much sooner.

When your team has the best communication tools possible, they can stay connected and keep customers satisfied. Now, that's a happy ending.

A long time ago, in a galaxy far, far away, there were futuristic spaceships built for interstellar travel, swords made of magic light, and artificially intelligent robots. Still, the communications technology left much to be desired.

If the Rebel Army had been equipped with cloud communications tools, Princess Leia wouldn't have reached out to Obi Wan Kenobe via drone. Rather than hiding her video communication in R2D2, she could have forwarded a secure message straight to the Jedi's phone.

Better yet, if the Rebels had integrated their communications platform with a file-sharing application, Leia could have uploaded the Death Star plans to a secure server and generated automated SMS messages to make sure the right people saw it. Granted, she might never have met her future husband, and "Star Wars" fans would have been shorted a couple movies, but it would have been a win in terms of communication hacks.

No movie better illustrates the importance of communication best practices in the workplace than the cult classic "Office Space." The moral of this story is that when you force people to do redundant paperwork and demand efficiency without giving them the tools to actually be more efficient, you risk losing good employees, or worse, having them rip you off.

"Office Space" focuses on cubicle dweller Peter Gibbons, who hates his job and the obnoxious boss who sends memos like they're going out of style and constantly gives Peter grief about missing cover sheets on his TPS reports. Peter and his best work buddies — two software engineers — plant a virus in the company's banking system to embezzle fractions of cents from each financial transaction.

In real life, disgruntled employees are more likely to quit than to hack your system and steal corporate funds, but "Office Space" underscores the importance of having the best communication tools possible. The film was made in 1999, before cloud communications became the industry standard for enterprise communication best practices, but imagine the difference it might have made if Peter's office had a digital platform to submit reports, communicate with co-workers, and streamline workflows. Better yet, maybe he could have worked from home and avoided his obnoxious boss altogether.

These are fictional examples of what happens when people don't have the right communications tools in place to avoid misunderstandings and missed messages. In real life, the results are much less dramatic — and much less fun. When your team has the best communication tools possible, they can stay connected and keep customers satisfied. Now, that's a happy ending.

Keep the Perspectives Coming!
Get our top articles delivered right to your inbox, every other week.
Making Collaboration Work: Enterprise Collaboration Marketplace and Best Practices
"The “New Normal” for how a younger workforce communicates." 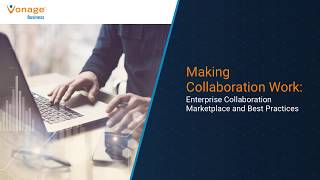